Tell different stories about how each of four scenarios unfolds. Pretend you are looking back from the future. The fun part of this step is to describe four uniquely different screenplays or documentaries.

“5”  Steve McQueen (1930 – 1980): “Because you are determined to work for hours at a thing even without a clue of where you’re going or where you’ll end up, you are bound to turn out something entirely creative today.” Aries

Hi and welcome to Friday’s Episode 76 in Season 2 of  “My Pandemic Year Natural Experiment” on this 10th day of July in the summer of 2020.

S2 E75 —  Guinea Pig Projections; S2 E74 — Summing Up Your Situation in an Intensely Psychological Game; S2 E73 — WorkFit: Chopping Off 12 Losers at the Intersection of Speed and Independence

So, the purpose of a four scenario exercise is to differentiate among at least alternatives which carried easily identified distinctions.  So far so good.

But, the team wasn’t finished just yet. I tasked them to:

Tell different stories about how each of four scenarios unfolds. Pretend you are looking back from the future.

The fun part of this step is to describe four uniquely different screenplays or documentaries.

Each starts with the same original trends but concludes with four extremely different endings.

Here’s what the names of each scenario boxes evolved to: 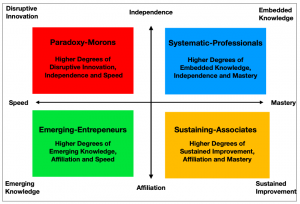 It seemed to animate their discussion and illuminate four distinct stories further.

An oxymoron is a figure of speech that combines two normally contradictory terms — like military intelligence. A Paradoxy-Moron describes those disruptively innovative inventors like Steve Jobs, who encounter a paradox, and say, “Hmmm, what’s the underlying opportunity hidden here that nobody else notices and I can exploit?”

Emerging-Entrepreneurs operating in early- to rapid- growth stages of their organization can’t afford to staff up with more bodies. They recruit experts to eliminate the extra financial burden of benefits, but they guard their organization’s core competencies while quickly managing increasing degrees of complexity.

Finally, Systematic Professionals — the experts who love their profession instead of a specific organization. Systematic-Professionals by the very nature of their work make the best candidates for developing a “Mobile KnowCo” — a business based on selling knowledge in the form of books, reports, DVDs and other knowledge packages over the Internet — that allows them to live and work anywhere in the world. But, many stay in one place — in or around university towns or urban and suburban centers — where they find clients for their services.

If you’re looking for the best employer or the best engagements with a client for you, the organizational culture scenarios describe four different types of work arrangements that attract and repel distinct talent clusters: “Paradoxy-Morons,” “Emerging-Entrepreneurs,” “Sustaining-Associates” and “Systematic-Professionals.”

What if each box is subdivided into four smaller boxes for a grand total of 16?

What do you have then?

What’s in it for you?

“3” Steve Zahn, 51: “Doing everything at once isn’t advised, although sometimes it can’t be helped. And the more you try to do, the more capable you become. None can control the natural force that is the flow of life.” Scorpio

Sure, who can argue with this TauBit of Wisdom?  The flow of life can’t be controlled. Especially during this Pandemic Year in Season Two of The Natural Experiment, right?

“5”  Steve McQueen (1930 – 1980): “Because you are determined to work for hours at a thing even without a clue of where you’re going or where you’ll end up, you are bound to turn out something entirely creative today.” Aries

That’s me alright.  Muddling through, lost with no real direction until something hits.  I’d rather it be sooner than later, but what are you going to do?

“3”  Steve Winwood, 71; Stevie Wonder, 69; Stephen Colbert, 56: “You are likely to persuade others with your example, so be careful to keep it in the realm of what, if exponentially multiplied, would benefit the world.”  Taurus

One could only hope to have such a great impact.  I’ll leave that for later.  I’m just trying to layout my original research in a work-in-progress.

“4”  Steve Smith, 30: “Avoid staying busy for the sake of looking busy. It is not lazy or idle to stop and take stock of the situation. In fact, pausing for perspective is the smartest thing you can do right now.” Gemini

I guess, but during this pandemic isn’t all we’ve been doing as we’ve been forced to accommodate our restrictions and find out what truly is important?

“3”  Steve Howey, 42: “Don’t discount what you know. You’ll find strength in your roots. Accept and love where you came from. Cancer energy teaches that home is home for a reason; embrace it.” Cancer

Yup, I chose this TauBit based on the first two sentences.

Not bad for a Friday night, right dear?

“4”  Steve Greene, 34; Steve Guttenberg, 61; Stephen King, 72: “The right attitude makes life about living and not about judging. You’ll be sure to stock your life with enough interesting endeavors to keep you focused on your own business.” Virgo

Or having too many passion projects vying for my attention may have the opposite effect.  I tend to choose one, like this work-in-progress “Volume Two Manuscript — WorkFit” to the exclusion of others when the my energy is high for many days straight.

Inevitably when this project runs its course, I turn to another.  But the momentum for the second has suffered and I have to reconstruct where I left off in it.

“4”  Steve Nash, 45: “You can put up a social media post and then take it down. Most times that doesn’t matter much, but it’s also true that once you hit send, it’s a matter of public record. Share advisedly.”  Aquarius

Boy, that’s true.  But if you agonize too long about posting, you’ll talk yourself out of expressing your true self.