Welcome to Day 31 on Saturday, 5/2/19.  Got an email from LinkedIn saying I appeared in 59 searches this week.

But, I should probably keep on sharing my articles on LinkedIn and  track my analytics.

It will give me feedback about how many out of my 1800 (+/-) followers aka potential audience follow their minor interests enough to click on “Artificial Intelligence, Quantum Computing and the Future of Work” which is in the works.

That I can’t control, right? 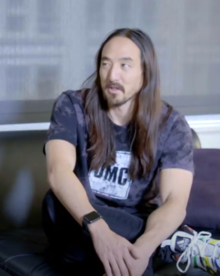 “5”  Steve Aoki, 41: “You made your choice.  Or did you? It felt like a semiautomatic response to your environment motivated by basic human needs like survival, identity and belonging.” Sagittarius

Ok.  Aoki’s Holiday Tau as it applies to me makes me second guess my list making choices.  How much subconscious influence does survival, identity and belonging factor in? Are they something within my control or things that happen to me?

“5”  Steve Carell, 57; Steve Martin, 74; Steve Wozniak, 69: “Clutter is a representation of disorder and wonky alignment.  Cleaning it up will cause seemingly unrelated and magical good fortune.” Leo

Did I already mention my obsession with all things Leonardo da Vinci?  I fed Pinboard, my knowledge bank, with articles about him some seven months after Emma the Baroness and I vacated with our close friends Jay and Elle in Florence, Italy.

There’re articles like: his lost masterpieces, how he was ahead of his time, his mind, as a geologist, why he never finished the Mona Lisa, why his city design was centuries ahead of his time and all of the many, many theories about his life and output.

Does that count as clutter?  Before I posted them to my knowledge bank for later retrieval? As I interpret the Holiday Tau for Carell, Martin and the Woz I want to believe it does.

“5”  Steve Nash, 45: “You can make sense of the illogical, find links between seemingly unrelated things and weave together disparate ideas.” Aquarius

Isn’t this what I’m all about as an idea packager?  Pick out from the noise a signal that connects with something else in a pattern overlooked by 95% of everyone else?

That’s watcha got G and G?  Yup, I’ll steal your Holiday Tau as well.  Which means compared to what TauBit I’m legitimately entitled to, a mere “3” this completes the sweep of the highest rated.