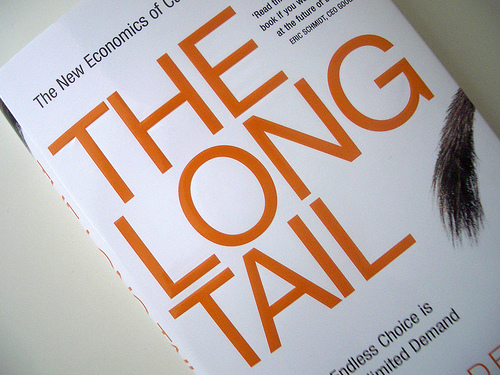 “The long tail is famously good news for two classes of people; a few lucky aggregators, such as Amazon and Netflix, and 6 billion consumers.”

Connect with Your  Fan Base: Why You Need to Build and Nurture Your 1,000 True Fans.

“To raise your sales out of the flatline of the long tail you need to connect with your True Fans directly.

Another way to state this is, you need to convert a thousand Lesser Fans into a thousand True Fans.”

A word of happy-ever-after caution.

Customers looking for deals at commodity prices recommended by friends, and people they don’t even know, win with the long tail model.

But by far and away companies that own what Jaron Lanier calls the “Siren Servers” in his book, “Who Owns the Future?” make out like bandits.

“The long tail is famously good news for two classes of people; a few lucky aggregators, such as Amazon and Netflix, and 6 billion consumers.

Of those two, I think consumers earn the greater reward from the wealth hidden in infinite niches.”

But for the rest of us, Kelly reveals the reality about living and creating in the Long Tail marketplace.

“Individual artists, producers, inventors and makers are overlooked in the equation.

The long tail does not raise the sales of creators much, but it does add massive competition and endless downward pressure on prices.

Unless artists become a large aggregator of other artist’s works, the long tail offers no path out of the quiet doldrums of minuscule sales.”

“A creator, such as an artist, musician, photographer, craftsperson, performer, animator, designer, video-maker, or author – in other words, anyone producing works of art – needs to acquire only 1,000 True Fans to make a living.”

Where do you find them?

Closer to the curve that splits the long tail from the head of the tail.

These raving fans are ready and willing to … pay you!

How do you know when you’ve found one?

“A True Fan is defined as someone who will purchase anything and everything you produce.

They will drive 200 miles to see you sing.

They will buy the super deluxe re-issued hi-res box set of your stuff even though they have the low-res version.

They have a Google Alert set for your name.

They bookmark the eBay page where your out-of-print editions show up.

They come to your openings.

They buy the t-shirt, and the mug, and the hat.

They can’t wait till you issue your next work.”

The key challenge is that you have to maintain direct contact with your 1,000 True Fans.

“Not every artist is cut out, or willing, to be a nurturer of fans.

Many musicians just want to play music, or photographers just want to shoot, or painters paint, and they temperamentally don’t want to deal with fans, especially True Fans.

For these creatives, they need someone else to manage their fans.“

How does it work?

By taking advantage of networking effects.

“As your True Fans connect with each other, they will more readily increase their average spending on your works.

So while increasing the numbers of artists involved in creation increases the number of True Fans needed, the increase does not explode, but rises gently and in proportion.

The number of True Fans needed to make a living indirectly inflates fast, but not infinitely.

Once you are in that mode, the actual number will become evident.”

Are there creative ways to make it work for you when you have a fan base?

Why not crowd-source your next book?

Before there was Kickstarter there was Fundable, a web-based enterprise which allowed anyone to raise a fixed amount of money for a project, while reassuring the backers the project  happened.

They acted like an escrow account until the full amount was collected, and they return the money if the minimum is not reached.

The author bypasses the publisher and makes a public statement on the order of: ‘When I get $100,000 in donations, I will release the next novel in this series.’

Readers can go to the author’s Web site, see how much money has already been donated, and donate money to the cause of getting his novel out.

Note that the author doesn’t care who pays to get the next chapter out; nor does he care how many people read the book that didn’t pay for it.

When it does, he publishes the next book.”

(12) Nurture your audience of followers striving to increase the number of your raving fans to 1000.